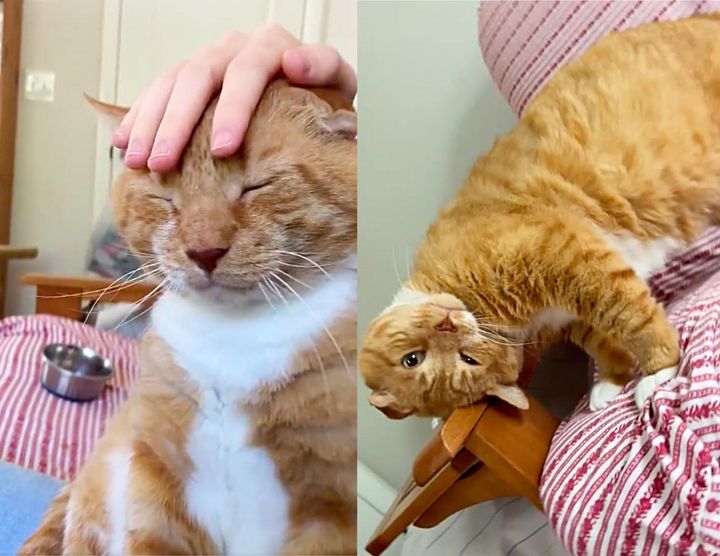 Earlier this year, Whitney Malin, an animal rescuer based in New Jersey, found an orange tabby cat in desperate need of rescue. He was in very rough shape with a severe wound on his back that was covered in maggots.

Whitney was able to get the cat with the help of a humane trap, and was shocked by the condition he was in. Dr. Morkos, a veterinarian, spent half an hour cleaning and treating the wound for the cat whom they named Garfield.

Once the infection cleared up, Garfield had surgery on his back to remove necrotic tissue to ensure a full recovery. 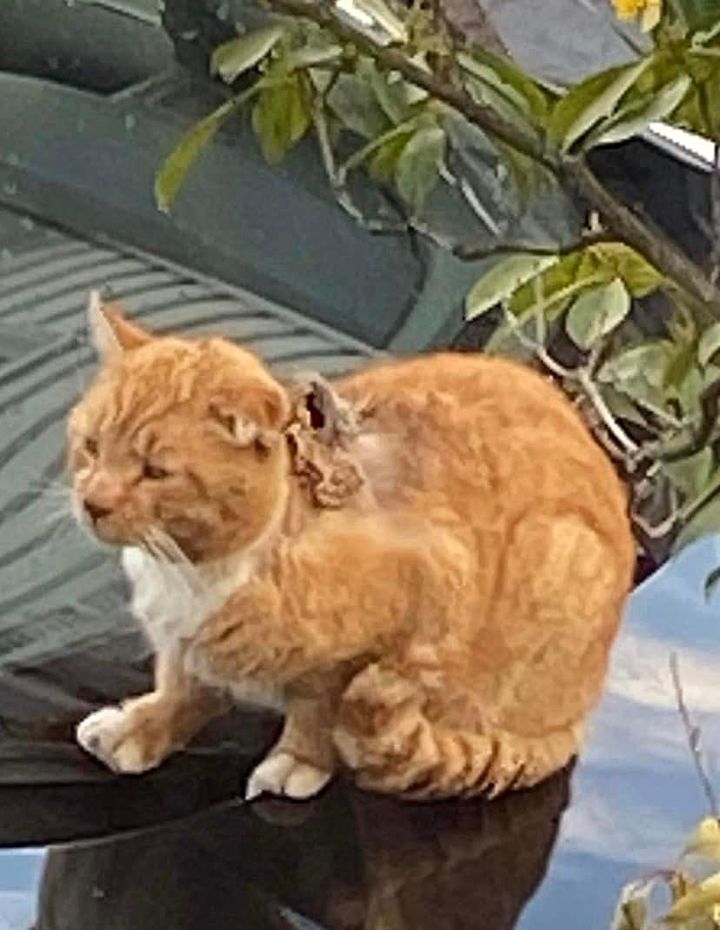 Days post operation, Garfield felt so much better as if a huge weight had been lifted off his back. His voracious appetite also returned.

Garfield was a bit wary of people at first after the long ordeal, but he clearly wanted affection. He needed a foster home where he could continue his healing process and to be cared for and socialized. 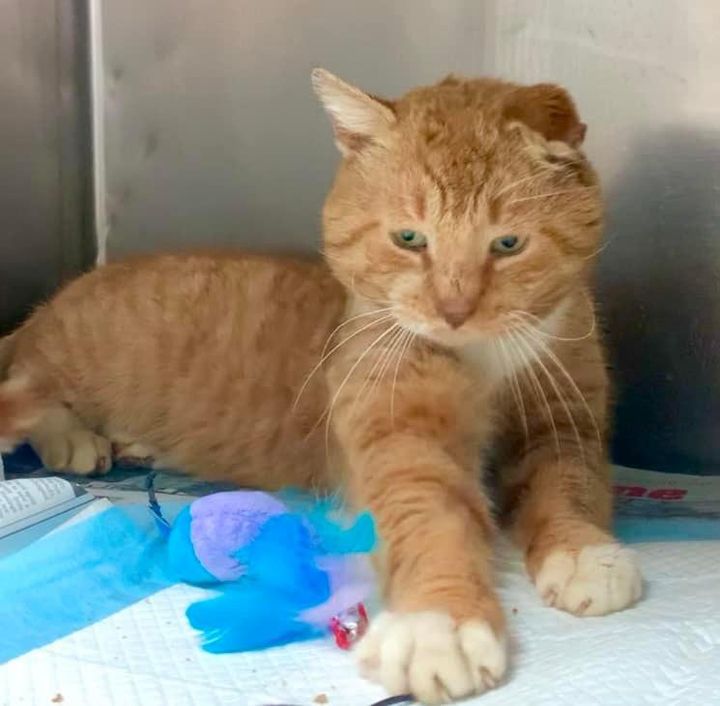 Laura S. and her husband Josh opened up their hearts and home to Garfield and made it their mission to help him thrive.

“This is a couple with so much love in their hearts, who have years of experience with all kinds of cats–difficult, easy and everywhere in between,” Whitney shared with Love Meow. “I want him to know what it feels like to have a good life.” 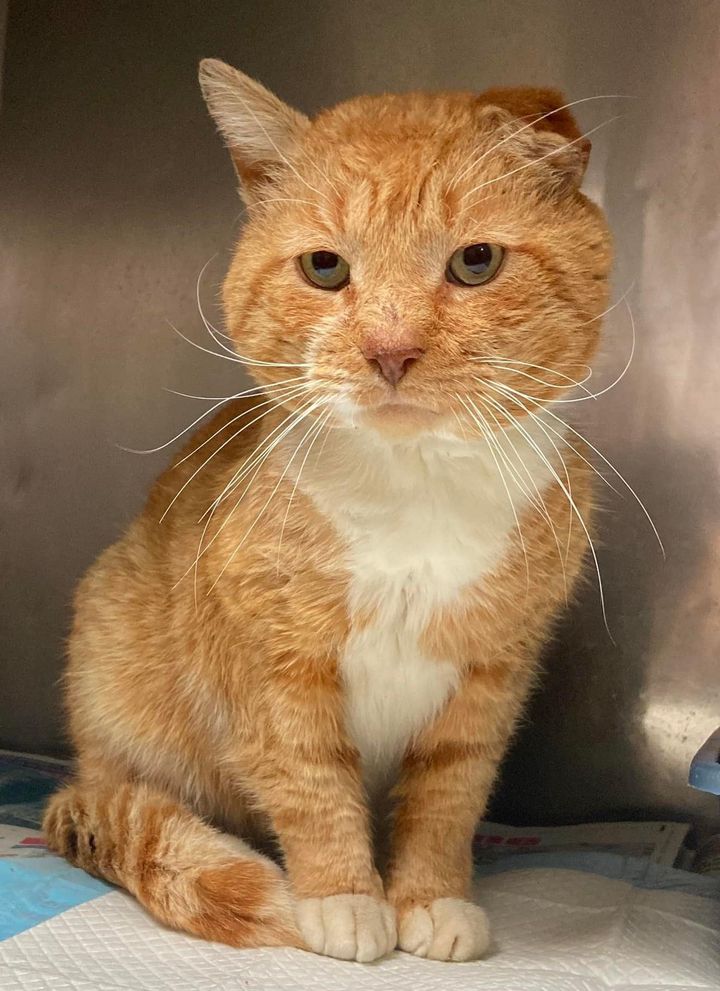 With lots of TLC, Garfield came out of his shell and started to show interest in playing. He was thrilled to be rewarded with delicious treats while he had a blast playing with an assortment of toys.

The couple continued to show Garfield that people aren’t so bad, while reassuring him that his life moving forward would be filled with love, comfort and joy. 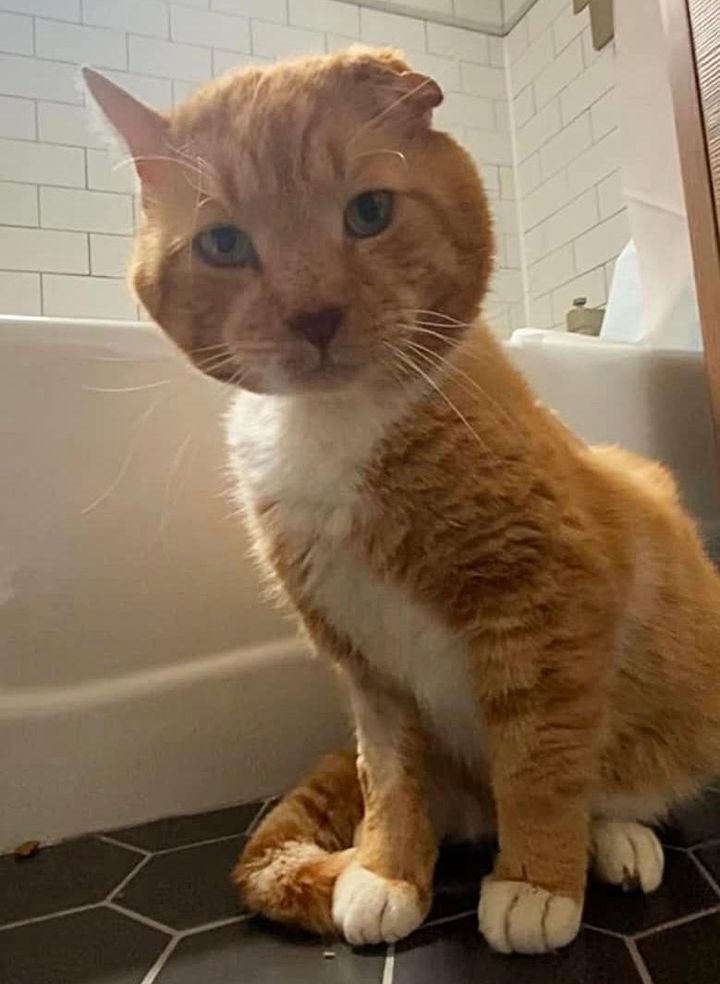 Garfield adjusted beautifully to indoor life, and soon discovered the amusement of his tail. He started catching it, trying to wrestle with it while channeling his inner kitten.

Just a few months prior, Garfield was leading a challenging life on the streets with a huge wound on his back. He’s come a long way and blossomed into the happiest, snuggliest purr machine. 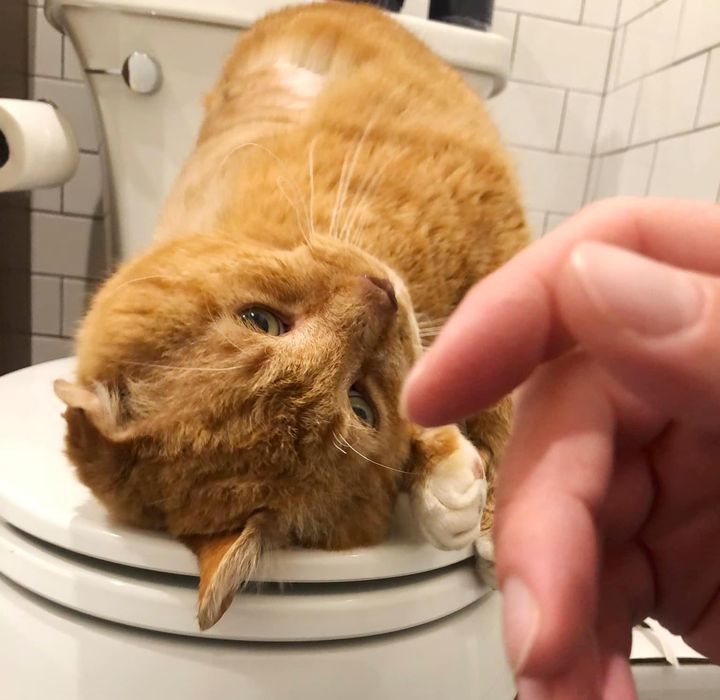 Garfield enjoys the company of his people and insists on sitting next to them, so he can receive pets on demand. He revels in head scritches and will rub against his humans for more.

The sweet boy has learned to perch on a lap for warmth and lots of snuggles. 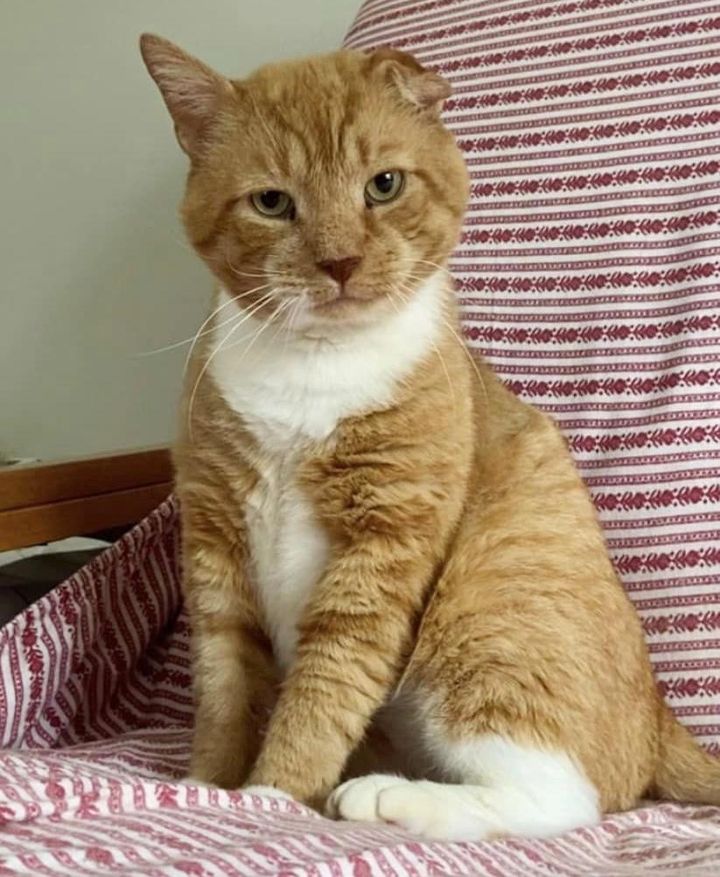 Garfield has made a full recovery, really filled out and grown a fluffy and soft coat.

When he was ready to find a place of his own, a wonderful family came to meet him. Cory and her husband, Guy, fell head over heels for the sweet boy and adopted him into their loving home. 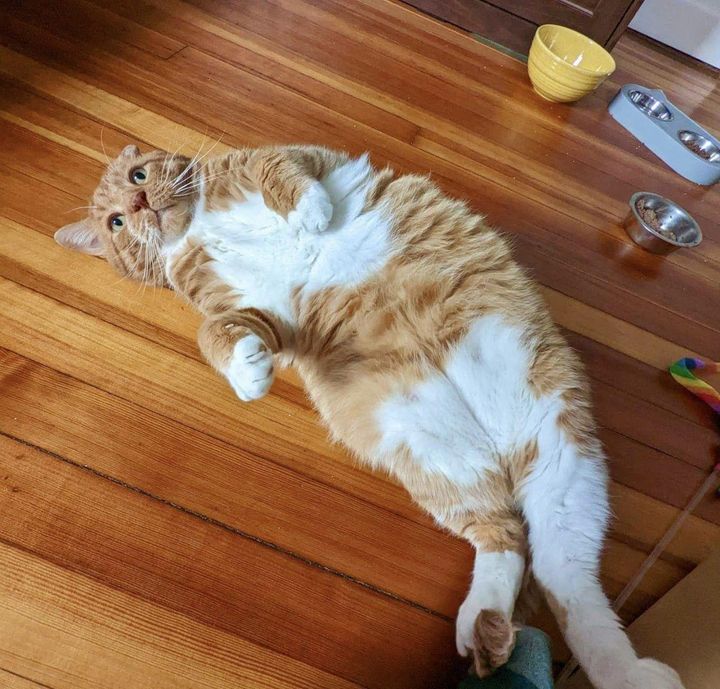 “Garfield had a rough start to life. Dr. Morkos and his staff took care of him and healed him. Laura and Josh fostered him, gave him so much love and taught him how to trust. And now, Garfield is in his forever home,” Whitney shared. 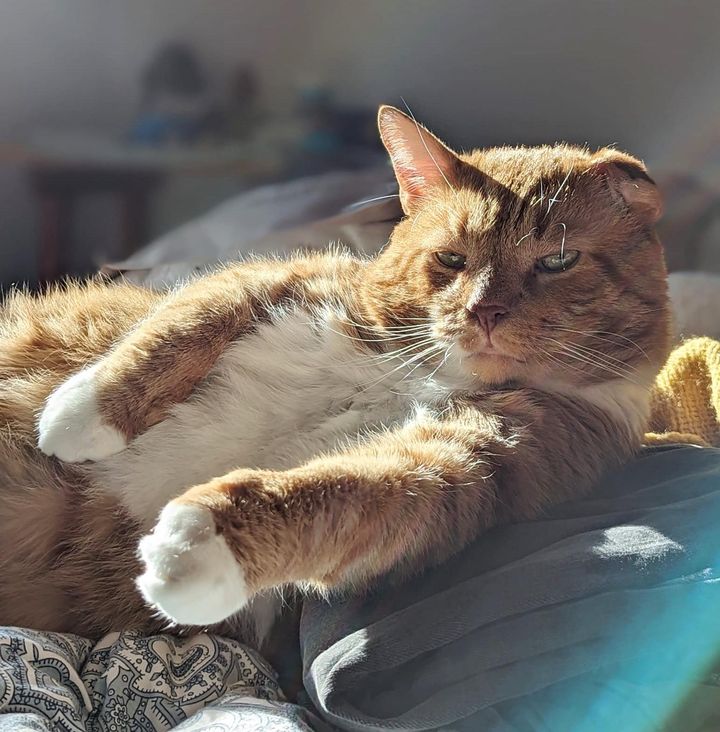 “He jumped up on the couch to be with the family. He even allows pets on his back–this is a miracle. Garfield is home, and I am beyond grateful.” 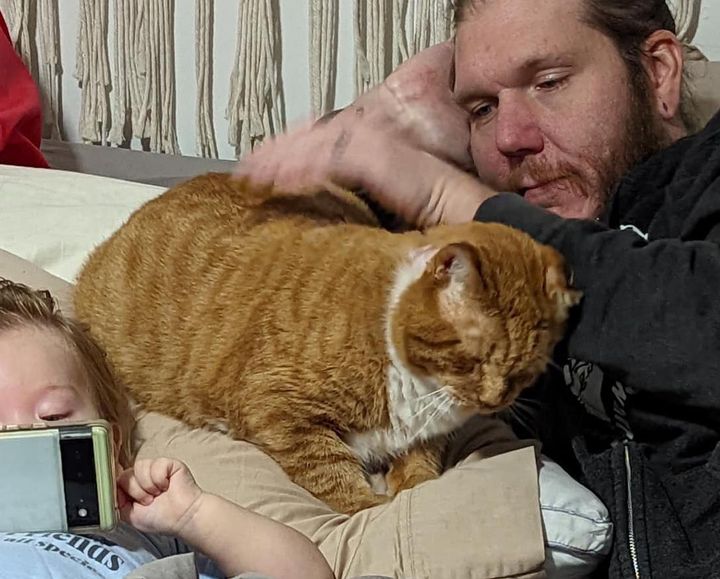