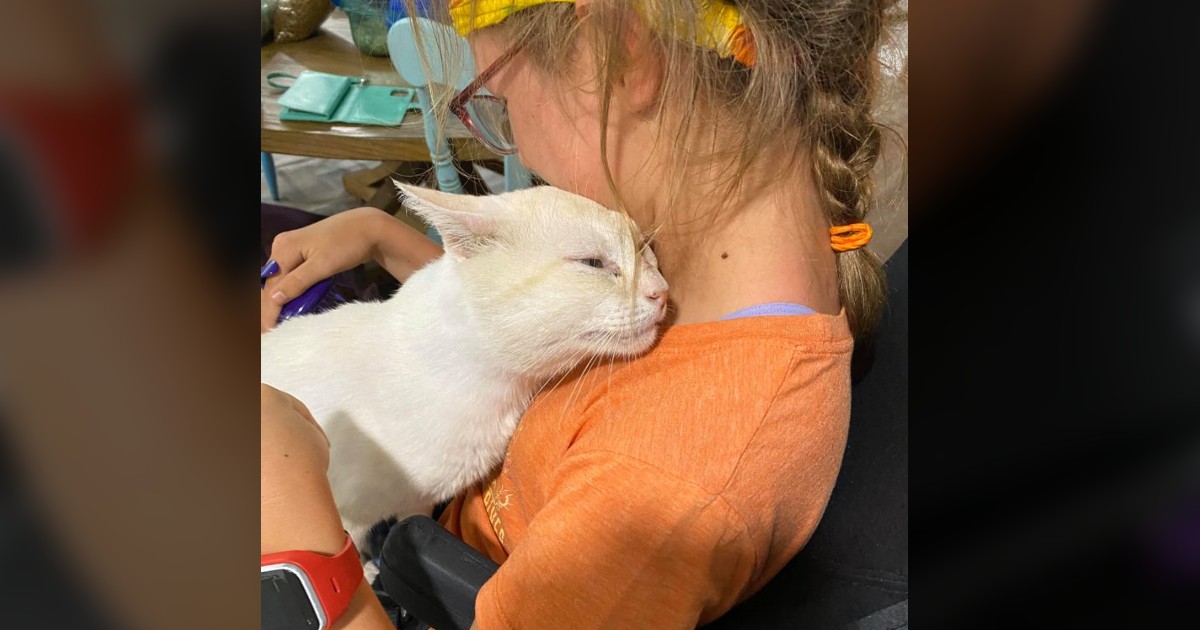 At first, finding companionship didn’t seem like it was in the cards for Kiley and Richey.

But some people are just meant to be.

While most cats were afraid of Kiley’s motorized wheelchair, Richey was not.

He learned how to be fearless while living on the streets and also seemed to have experience living in a home, which made him Kiley’s perfect match.

The blue-eyed kitty kept returning and became a regular at the colony feeding site.

“He was ALWAYS hungry and was obviously owned at some point,” Poole wrote in a caption on his YouTube video. “I believe he was abandoned by his owners when they moved out of the apartments.”

Poole started to talk to the cat and found that he would talk back.

After giving him some catnip, the cat eventually allowed Poole to pet him.

Poole decided that Richey would make a good rescue cat, so he lured him into a carrier with catnip and took him to the vet.

Richey was given a name, microchipped, and neutered. It was discovered that Richey was quite the squish when he was placed with Suncoast Animal League.

He loved the attention and just wanted to be pet and cuddled all day long.

He was also quite vocal. Richey adjusted very well to being an indoor cat and was ready to be put up for adoption.

Lori Griggs and her daughter Kiley came to the shelter a few months ago.

They, unfortunately, visited multiple shelters but still had trouble finding a cat that wasn’t afraid of her motorized wheelchair… until now.

Richey immediately hopped up into Kiley’s lap when they first met.

Kiley couldn’t have been more overjoyed.

He didn’t even flinch when it came to the wheelchair. He hopped right up in her lap and got cozy.

“He could care less about her driving around the house. Actually, he is like a speed bump and doesn’t even move out of the way,” Griggs said. “When we opened his cat carrier in our daughter’s bed, he crawled right up onto her and snuggled.”

Richey absolutely loves being a lap cat in his new home. He and Kiley are practically inseparable.

“It is like he has been a part of the family ever since he got here. He sits in her lap in the wheelchair as she does her schoolwork and snuggles her throughout the day,” Griggs said. “I work from home and our daughter is homeschooled so he gets lots of attention all day long, every day. It is just cuteness overload here!”