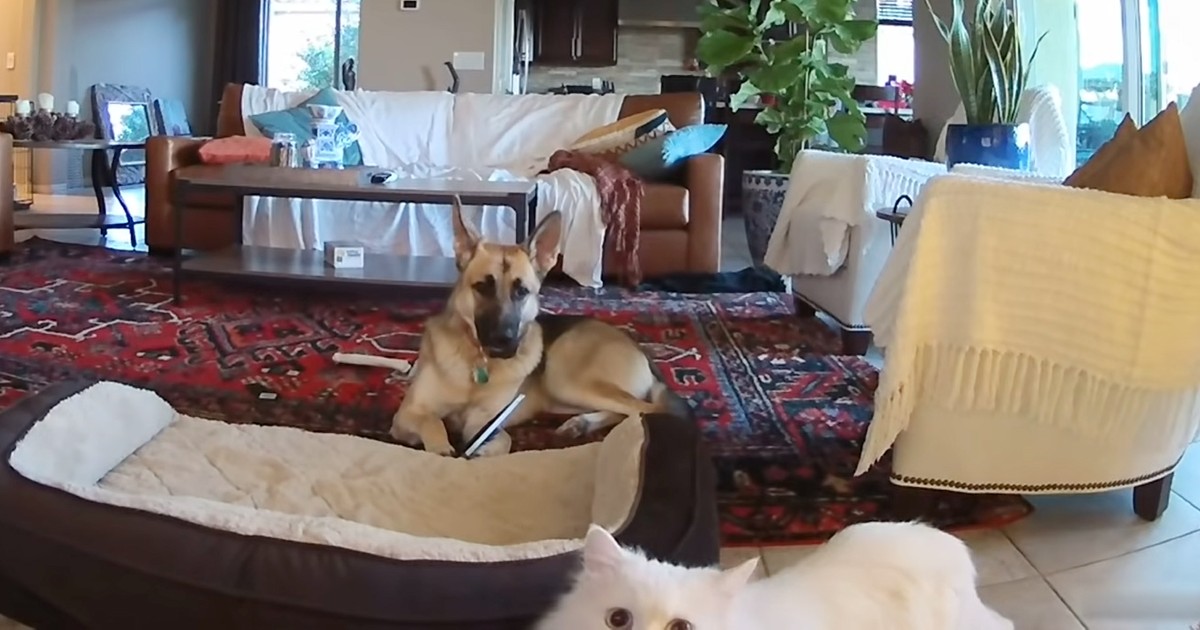 We’ve all heard of the phrase terrible the “Terrible Twos.” Apparently, it applies to our dogs as well as human toddlers.

According to the Animal Humane Society, it’s not just 2-year-old pups that can turn into little havoc makers.

Puppies can hit this stage between 6 and 12 months and Carly’s 1-year-old German Shepherd Mercy is smack in the middle of this stage.

[She’s] going through a terror phase,” Carly told Ring, Amazon’s surveillance camera company. “She’s eaten every single ornament she can reach on the tree and has proceeded to go after picture frames!”

Carly decided to set up a Ring cam to spy and Mercy so that she could scold her for her destructive behavior.

It just didn’t go quite as Carly planned.

First, Mercy was just confused and didn’t drop whatever she had. Second, Carly’s surveillance was no match for her cats. There were far too clever and had Mercy’s back.

The camera also recorded the whole ordeal, which made it all the more hilarious. It starts with Mercy chomping down on some stick-like thing.

That’s when mom Carly chimes in, “Mercy… What is that? Put that down!” Mercy’s ears perk up, but she just looks confused.

She hears her mom, but she doesn’t see her mom. So she freezes and then just looks around.

But Mercy just sits still. That’s when the cats move in. They hear mom’s voice and come rushing over to the camera.

First, we see Carly’s white cat, then the black and white cat name Ling Ling jumps in to diffuse the situation. The cat starts to cover up the camera so mom can’t see anything.

Ling Ling just starts sniffing the camera out to see if mom is inside.

But she doesn’t, she just keeps sniffing around.

But Mercy doesn’t listen either and that’s where the video ends.

“It’s hard to stay mad at them when we saw their reactions to my voice,” she said.

Now, who said cats and dogs don’t get along? This dog and these cats do. They even have each other’s back.

The video of Carly’s attempt at remote dog parenting was viewed on YouTube more than 814,000 times. And the comments were gold!

“That first cat came out and was like, ‘Wait, can she see us?” said one commenter.

“This entire video blessed me lol!! Mercy didn’t move a piece on an inch, aside from tilting her/his head and ponder if it’s worth chewing while being scolded. The white cat popped in to find out what in the foolishness was happening. Ling Ling was going to get to the bottom of things. Mercy continues debate internally about chewing in front of owner (possibly also contemplating the meaning of life), and allows Ling Ling to get to the bottom of things!” said another.