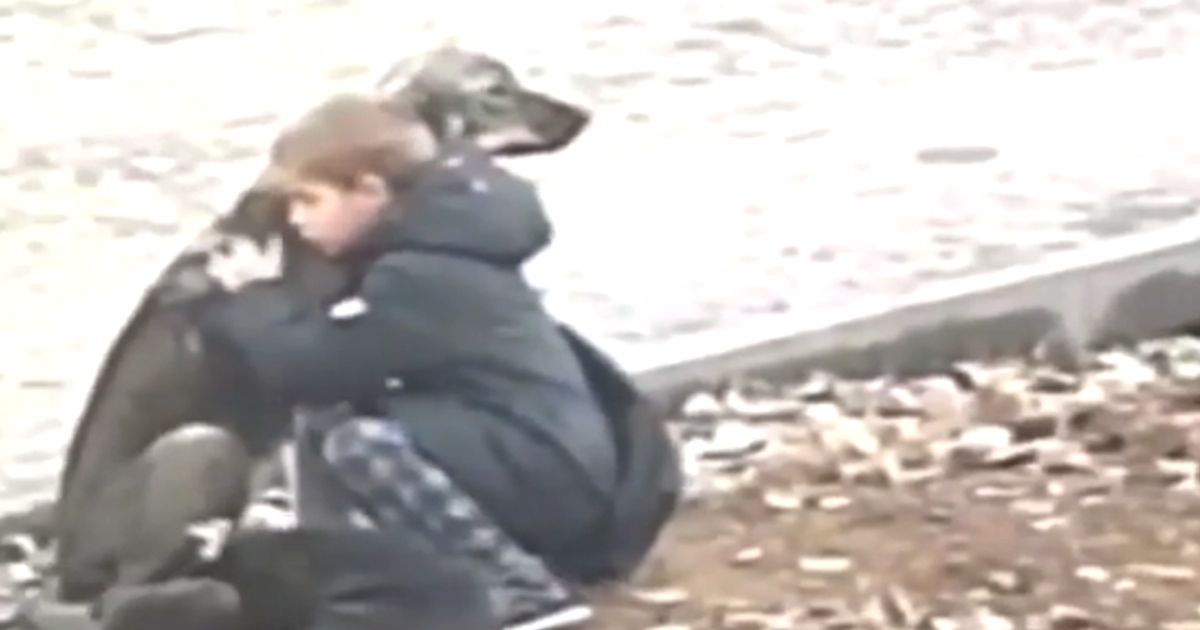 Stray dogs are usually seen as a threat or a nuisance in some countries. Not everyone stops to feed them, with others even picking up rocks to throw or attempting to kick the poor animals.

Millions of stray dogs need to brave the streets everyday, surviving on scraps while trying to avoid harm or ending up as road kill.

These poor dogs are lucky to see another year if they’re lucky.

Then you have nations who actually cook dog meat.

Many kind hearts have opened shelters, or even taking dogs into their homes. It’s not easy, and the risk of getting bitten or dealing with disease is all to real for these people.

Then are are those small hearts that inspire us.

This is a boy named Ibrahim. Ibrahim was walking home from school in Grozny, Russia and that’s when he saw two street dogs.

Where others would have simply ignored the dogs, or worse, Ibrahim was different. The young Russian boy stopped and gave the two dogs each a big hug. He got up and prepared to leave but came back for a hug.

Ibrahim didn’t know, nor would he probably care, that someone was watching. All the boy wanted to do was show the dogs a little bit of love and compassion.

Those dogs needed Ibrahim’s hugs for sure.

He must have thought he was alone but it turns out, someone was watching. A resident in a nearby building saw it all and even captured the boy’s act on video.

And as expected, the clip went viral!

Katerina, a good friend of Ibrahim’s family, said she saw the video of Ibrahim and the dogs when it went viral on social media. She immediately knew who it was, saying the boy was “very kind”.

Ibrahim goes to the same school as Katerina’s daughter.

“I saw the video. That’s Ibrahim,” Katerina, a friend of Ibrahim’s family, told The Dodo. She says that the video really reflects the boy’s selfless and loving spirit.

“He goes to school with my daughter and helps her carry her bag. He’s a very kind boy.”

Such a gentleman too!

And don’t think those dogs just quickly forgot about the sweet little boy. Dogs remember kind souls, and chances are every time Ibrahim would walk by, they would wait on attention.

Ears up, tails wagging and all.

Stray, street dogs, while often a mixture of different breeds have an uncanny ability to understand humans. Since they’re “street smart”, those instincts are sharper and as such usually make for a smart dog.

Yes, they can be rabid and are dangerous so exercise caution when approaching one.

However, there are lots of beautiful stories out there of people opening their doors to care for these strays. Sometimes, all these canines need are a little bit of love.

The video captured of the boy certainly lives up to that testament! Check out the sweet clip below: