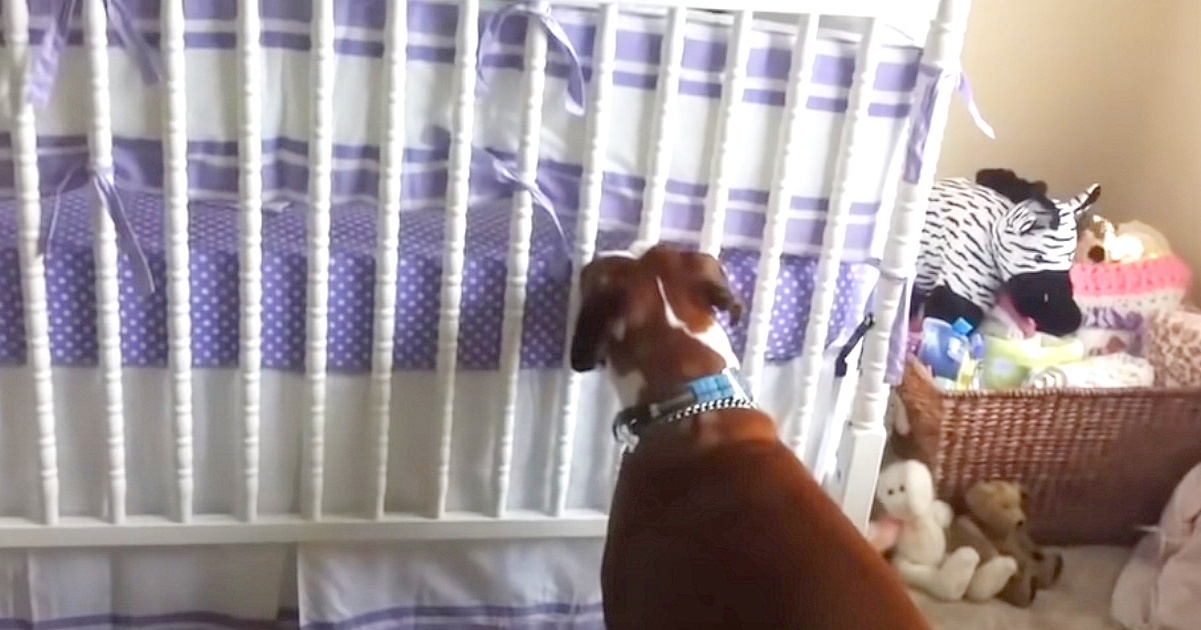 Bella loves little Malina. Mom and dad were concerned as to how their dog would react once they brought the newest addition to the family home, but all their fears vanished when they saw how protective this Boxer was.

In a video posted, Malina is seen sleeping in her crib but like all babies do, she eventually wakes up and cries.

Dad lifts the draping sheet to reveal a sleeping dog under the crib.

Bella the boxer raises her head, alert and concerned for the tiny human above her, then gets up facing the crib. She starts whimpering in frustration, knowing she’s helpless to do anything about the crying baby.

The dog makes her way toward dad who’s been filming the whole scene. It’s as if the dog is telling him to let go of the camera and do something about his crying daughter. Big woof to that!

Dog Time describes this breed as such:

“Boxer dogs were originally bred to be medium-size guard dogs. Today, although they are a part of the AKC’s Working Group, Boxers mostly find homes as loving family companions. That said, they still retain their high energy levels and need plenty of exercise.”

They go on to say that,

“Square-jawed and muscular, this breed is the George Clooney of the dog world–a looker with a sense of humor and an underlying sweetness. They adore their families and will also appreciate consistent training that doesn’t rely on harsh reprimands.”

So it’s all about the upbringing. Safe to say that Bella here is a sweetheart!

And to further emphasize that these dogs are super wonderful breeds, AKC has this to say about boxers.

“Boxers are upbeat and playful. Their patience and protective nature have earned them a reputation as a great dog with children. They take the jobs of watchdog and family guardian seriously and will meet threats fearlessly. Boxers do best when exposed to a lot of people and other animals in early puppyhood.”

One look at how Bella reacts to Malina’s crying confirms both statements about this dog.

But how and why does Bella react this way? It’s the pack mentality.

Sure, dogs are smart. But being a member of a pack is hardwired in to their fluffy systems. Dogs recognize that their families are that “pack”. And each member of the pack plays a role. Including protecting the young.

Bella here knows that Malina is the newest and smallest member so she’s taken it upon herself to watch over the little human.

Of course as parents, it’s still better to take precautions and to make sure that the dog is alright with having the baby around. It’s rare but it’s been known to happen. some dogs can get hostile.

No one knows though why most dogs are always excited to see babies and kids. Even if it’s not their own.

Watch this sweet boxer react to his baby friend below!