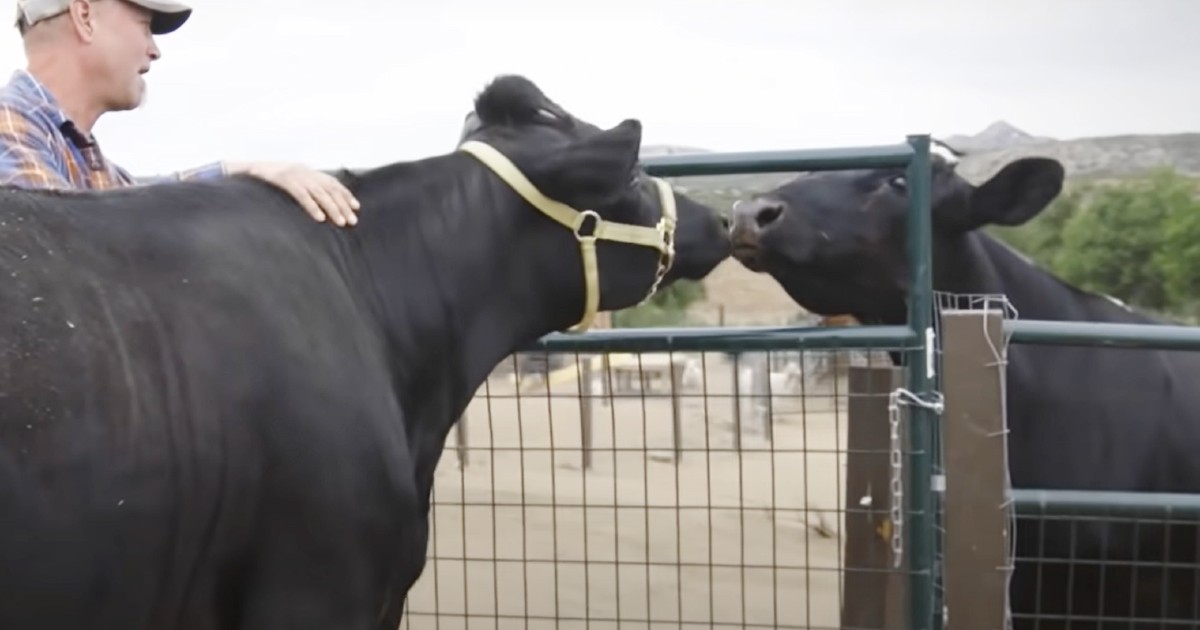 They’d been apart for months, but now, this sweet cow and her ‘seeing-eye ‘ sister were finally together again.

Did you know that cows have best friends? According to research by the University of Northampton, cows have selective friendships.

They are a lot less stressed out when they are around their person and will gravitate back toward them when separated. This is especially true for cows that were reared together.

For cows Hope and Love, they were each other’s person.

They had spent the first eight years of their lives together and had a special bond.

This is especially so since Hope was born blind. This made Love take on the role of her seeing-eye buddy.

Hope and Love were born at a factory dairy farm.

Hope was later purchased by a family who was going to raise her and breed her for their family’s dairy needs.

But they later realized she was blind and bought Hope’s sister Love. This left Hope needing a new home. Thankfully the folks at Sale Ranch Sanctuary in Temecula, CA, were able to offer her refuge on their farm.

But that meant that these two cows who were inseparable were now separated. It also meant that Hope no longer had her seeing-eye cow.

Hope was definitely stressed when she first arrived on the farm.

But the rest of the animals on the farm really helped to make her comfortable.

They would lie down in a circle and groom each other, eat together, and sleep together.

So, it wasn’t long before Hope started to feel at home in this new setting.

“Over the last eight months, she has blossomed into a happy confident little girl,” Jen at Sale Ranch Sanctuary told The Dodo.

It had been eight long months since Hope and Love had last seen each other.

But eventually, the day came when the girls were able to be reunited, and Love would come live on the farm with her sister.

Jen was overjoyed that Hope would have her best buddy and her seeing eye cow again.

“Hope knew her sister was here before we even unloaded her,” Jen said. “The second we got here and Love mooed and Hope recognized that moo.”

The two cows immediately started to lick and nuzzle one another. Hope looked especially happy to see her sister.

“The girls absolutely remembered each other. Hope was so happy. It was really a magical moment the bond they had the first eight months of their lives. So, this is really special,” Jen said. “I really think that their bond is going to come back and be stronger and better than ever.”

Two months after their reunion, Hope and Love were just as inseparable as they had ever been.

“These girls will never be separated again. They have the rest of their life to grow old together and I am so grateful that we were able to reunite them so they can be together forever,” said Jen.

In a rare public appearance with his girlfriend Alexandra Grant, Keanu Reeves appears positively radiant.
Actor Keanu Reeves has long been considered to be a
0 173