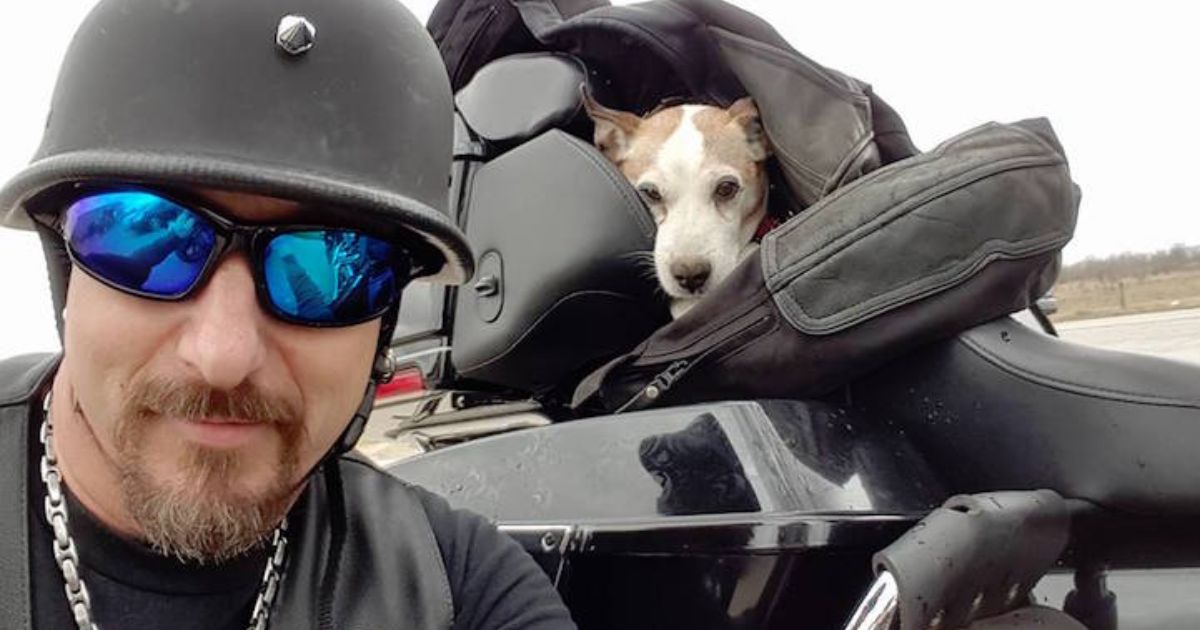 On Valentine’s Day, biker Brandon Turnbow showed how much love was in his heart when he stopped everything to save a little dog who was being abused.

Turnbow was riding his motorcycle down Highway 171 in Texas, and he was planning to meet his dad for a day of bike riding.

As Turnbow cruised down the highway, he saw a cruel man beating up a little Jack Russell.

Turnbow was shocked, and he quickly decided to give the guy a piece of his mind. But before he could say anything, the man threw the dog onto the curb and drove away.

The little dog was hurt and scared, and Turnbow knew he couldn’t just leave him there.

Turnbow slowly approached the dog, who was shivering

. Turnbow was afraid the dog was going to run into traffic, but he thankfully didn’t move.

“I take a chance and just fold my body over him to see if he will bite or trust me,” Turnbow wrote on Facebook. “He then just lays his body into me shaking so I just stand up with him in my arms and sit him on the bike seat. I was thinking now what?”

Turnbow knew he had to move quickly, but he didn’t want to scare the dog even more. So, before he went back on the road, he turned on the motorcycle to help the pup get used to the vibrations. Once the dog seemed comfortable, Turnbow put the little Jack Russell into his bag.

When he saw the dog’s big eyes looking at him, he immediately fell in love.

“I watched in my rear view and saw this guy throw the dog into the air curbside and drive off. I went after the guy just to give him a number one sign,” Brandon said on Facebook. “And I now have a Co pilot — Meet Mr. DAVIDSON.”

Turnbow named the dog Mr. Davidson after his Harley-Davidson motorcycle, and he took the pup home with him that day. Luckily, Mr. Davidson loved riding Turnbow’s motorcycle with him!

“I try to look back as much as I can to see if the dog was trying to move around or not and surprisingly he actually liked riding…. So we had about 45 miles to ride to get back to my place and Mr Davidson was in heaven! I actually think he was a little mad at times that I was blocking his wind!”

The 10-year-old dog quickly settled into life at Turnbow’s house, and he fell in love with his new dad.

Turnbow loved Mr. Davidson just as much at the dog loved him. He even wrote a sweet song about the pup.

Two years after being rescued, Mr. Davidson is still as happy as can be with Turnbow.

The two love sitting by the fire together after a long day of work!

Turnbow was thankfully in the right place at the right time, and because of that, he was able to rescue this little dog who had no one else in the world. We’re so glad these two found each other!