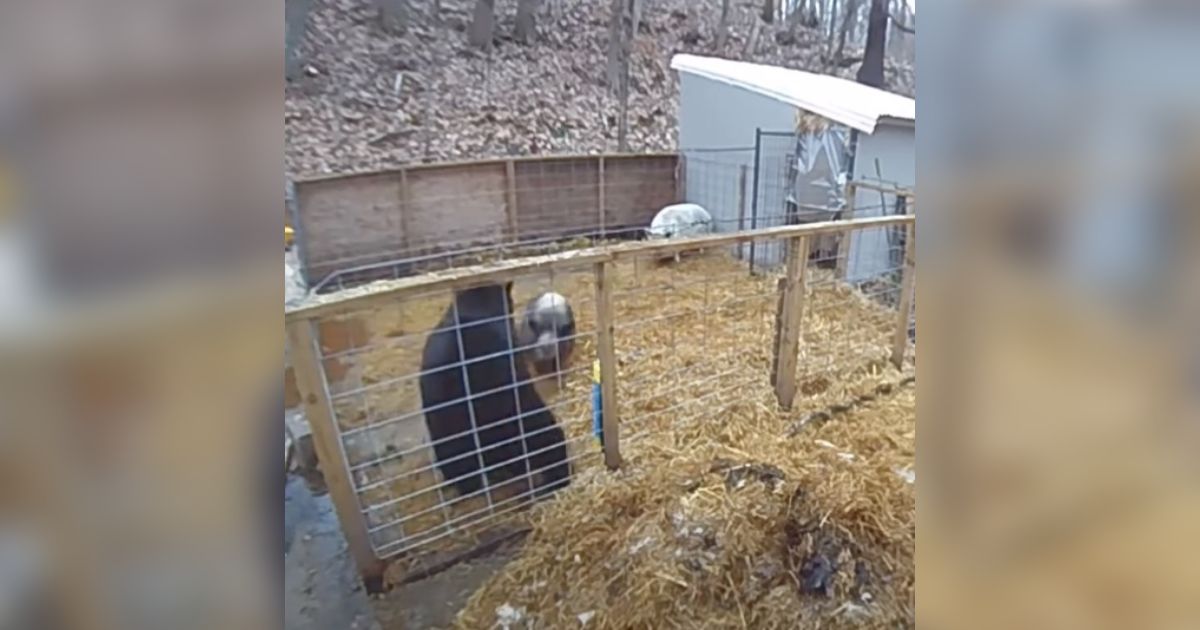 Bears can look pretty intimidating when upright on their back two legs.

When a big black bear climbed inside of Hamlet and Mary’s pen, the two pigs sent that bear running.

The territorial pigs’ attack was caught on video and ended up going viral.

The video shows a black bear hopping the fence and jumping into the pen while the white pig Hamlet, a.k.a. Hammy, looked on.

Hammy charged at the bear as soon as he touched ground. Clearly, this bear was not welcome in their pen.

Hammy continues to charge at the bear head first into the bear’s tummy. They circle a bit before the bear backs up and Hammy wanders off to the corner.

But Hammy wasn’t surrendering. He was tagging in his partner Mary, a black pig. She comes charging out of the shed just as soon as the bear thought he was going to get a break.

That poor little bear started running as soon as he saw Mary. She chases after the bear and corners him. That’s when the bear gets a little confidence, or maybe he was just scared, and stands up tall.

But the bear knew that Mary had him good and that he was outnumbered. He started to look for an exit strategy.

He got back down on all fours and slowly walked toward the area where he got in. When he was closed enough, he climbed back over the fence and jumped into a pile of hay.

He stopped to look at the two pigs, perhaps wondering why the two had been so unwelcoming to him.

Meanwhile, Hammy and Mary didn’t even break a sweat. They took on that bear and sent him running like it was nothing.

Or just a typical day in the life of two Connecticut pigs. Hammy and Mary’s owner Kevin David told WTNH that he doesn’t believe that the bear was going after the pigs as a potential snack.

According to the U.S. National Park Service, the American black bear’s diet consists mostly of berries, fruit, sedges, and insects.

David thinks that the bear was trying to get something that Hammy and Mary were digging at.

Perhaps some other kind of hidden morsel. Thankfully, both pigs were uninjured in their run-in with the black bear

“They’re fine,” he told WTNH. “They’re some heavy pigs and we’re pretty sure that bear is still a cub.”

The video of Hammy and Mary fighting off the bear was shared on several news sites.

Including KHOU 11 who posted it on YouTube where it was viewed over 26,000 times.

“Need hot wire around that pen to keep the pigs safe…good thing it was a young bear. Never mind bears, coyotes, and wolves…just stray dogs will kill those pigs if left unprotected,” one commenter wrote.