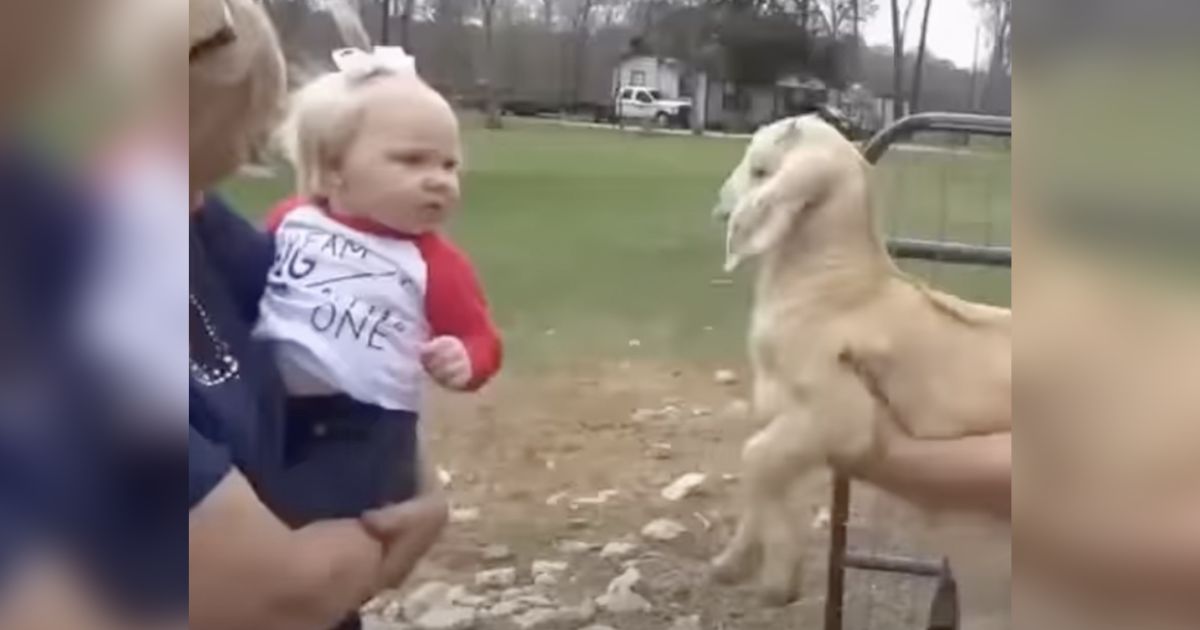 It was kid vs. kid… and the fight was tense. Who would win? Human kid or goat kid? There was no way of knowing.

And the only way to find out was to let the heated farm match unfold.

On the right, we have goat kid being held by his golden braided handler.

On the left, we have human kid wearing a giant hair bow and being held by mom.

The goat kid decided to be bold and start with its offensive strike, letting out a sturdy bleat.

Human kid was not about to let this adorably fuzzy horned creature show her up.

She was fully prepared to take home the title of “Cutest Kid.”

So, she let out a calm but confident “ahhhhh.”

Offended by human kid’s bravado, goat kid almost immediately hit back with an aggressive bleat that borderlined as a scream.

Human kid didn’t waste any time by coming in with another subdued but strong “ahhhh.”

Her strategy was to win the title of “Cuteness Kid.”

So, she was banking on using her sweetness to win.

She knew she had struck a nerve in goat kid and was going to evilly exploit this by making the human kid look unhinged.

“Are you talking to the goat?” human mom asked?

Human kid most certainly was not. Little did mom know, she was battling goat kid for a coveted title.

She stayed cool and silent, looking as precious as possible until she was prompted by someone off-camera to “tell her.”

This was goat kid’s shining moment.

And she was in it to win it.

She let out a long elegant bleat that was typical of a farmyard infant like her and could melt even the hardest of hearts.

It caught human kid off guard and threw the tot off balance.

She didn’t know what to come back with and let out a clumsy “arghhh.”

Sensing her defeat, she tried to hold up a finger to goat kid’s lips to silence her.

It was a hard-won screaming match but goat kid triumphantly took her seat as the “Cutest Kid.”

According to New Scientist, goats reveal their feelings with different-sounding bleats.

Goats will scream and yell to relate things like hunger, fear, excitement, boredom or just to say “What up?” to another member of their herd.

Goats might scream at humans for the same reason.

It’s not known exactly what this tiny goat was trying to tell this tiny human.

But it didn’t seem like some innocuous friendly chit-chat.

Their convo did seem pretty heated.

A video of their face-off was posted on YouTube where it was viewed more than 144,637 times.

Just like their human female handers, people on the internet found it pretty amusing.

Check out the video of this intense battle below.