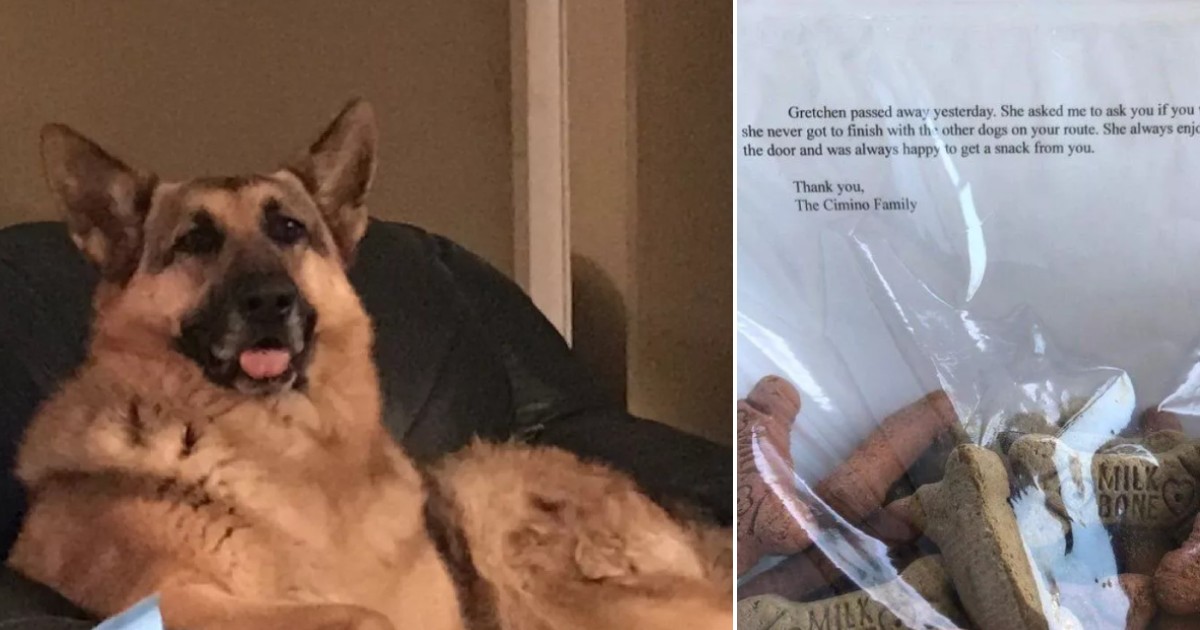 Mailmen and dogs have a famed rivalry that has been making people laugh for generations. In the old movies and cartoons, a mailman being chased away down the street by a grumpy dog was quite common. Nowadays, it seems that the two have made their peace and buried the hatchet!

The story of one friendly duo shows us just how far we have come.

In Texas, Fernando the mailman, made his rounds and hit the route that he was accustomed to each day. On his route, he learned where some of his most expectant customers were waiting. Most of the time, however, those “waiting individuals” were dogs waiting for a pat on the head! Fernando loved to care for the dogs that he visited each day on his route.

For Fernando, Gretchen was one of his favorites.

Gretchen is a german shepherd that always looked forward to seeing Fernando each day. As time went on, Fernando and Gretchen developed a special kind of friendship that only a mailman and dog can have! Some days, Fernando would even bring treats to the waiting dog, just to make her happy.

In April, however, something terrible happened.

When Fernando visited Gretchen’s home in April, he wasn’t greeted by the wagging tail and happy face that he usually was. He walked up to the home and picked up the mail anyways. Gretchen was probably at the groomers or something.

When he grabbed the mail, he noticed there was a letter addressed to him.

Picking up the mail, Fernando realized that one of the letters was addressed to him. It was a note from the owners that lived in the house. Next to the note was a bag of treats. As he read the letter, his heart sank.

“Gretchen passed away yesterday,” the note reads. “She asked me to ask you if you would share her treats that she never got to finish with the other dogs on your route. She always enjoyed seeing you come to the door and was always happy to get a snack from you. Thank you, The Cimino Family.”

Getting home, Fernando was heartbroken.

His old friend who visited with him every day had passed away. He decided to show his daughter the touching note. Once his daughter saw it, she knew it was a beautiful gesture. Deciding to post a screenshot on Twitter, they never expected what happened next.

When Fernando’s daughter posted the picture, it immediately started blowing up.

People fell in love with the mini-story that was being told of the mailman and his doggy friend. Even though it was heartbreaking, people couldn’t seem to stay away from the touching emotions that anyone with a heart would feel reading the letter.

The post was so famous, even Gretchen’s dad saw it!

Coming full circle, Gretchen’s dad even saw the post on Twitter! As a tribute, he decided to post a video of the sweet dog getting excited about seeing Fernando one morning.

Girl starts being followed by creepy guy until random biker pulls up
Bikers are people who help other people on the road.
0 101