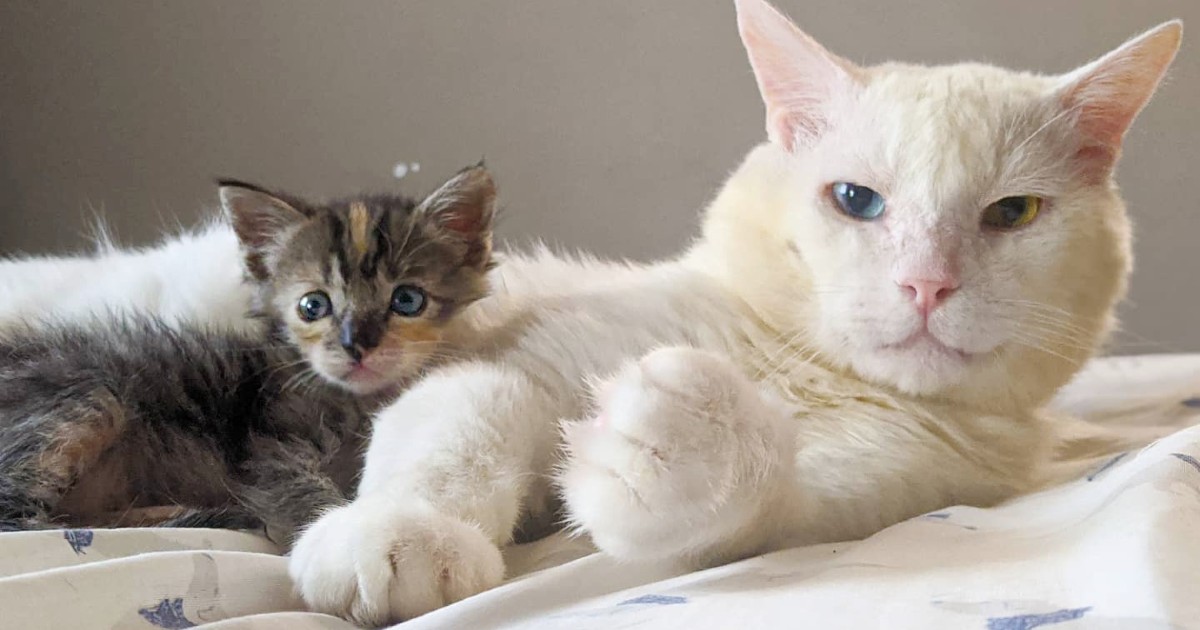 When Jaina of Cats of San Bernardino rescued Phoenix, he had been wandering outside of a gated apartment complex for over a year already.

From what they learned, he had been abandoned by his previous owners and suffering from severe depression.

Upon further evaluation, they learned he had FIV and a severe case of mange. That would explain why most of his facial hair is gone and his skin has become red.

Fortunately for Jaina, Phoenix was friendly and didn’t mind being touched. They were able to take him easily to their rescue home base. They started with Phoenix’s treatment right away and he was able to fully recover.

That’s when they discovered that Phoenix was older than he looked.

He most likely had brittle bones already, which is the most likely reason he prefers to lie down and sleep all day.

“He would let us pet him and everything like that but he was very aloof and so unwanting of showing affection,” Jaina shared.

They noticed that Phoenix really just wanted to be by himself and didn’t want anything to do with the other rescue cats.

Jaina thought Phoenix just really want to be alone and she accepted that.

But then a little rambunctious kitten came into their lives and disturbed Phoenix’s solitary world.

Ruby was part of a litter of four kittens who were born in someone’s backyard and abandoned by their mother. When they got the kittens, they were all sick and weak, and it took some time before they recovered.

Getting Ruby to eat was a struggle, but they pushed through. Until one day, Ruby herself sought out her milk and fed on her own.

And soon, the most amazing thing happened!

Little Ruby gravitated toward Phoenix. She played with his tail and used her little paw to pet him.

“I originally put my hand over Phoenix. I don’t know how he’s going to react. She’s little. You never know,” Jaina explained. “He could hurt her because of his size.”

At first, Phoenix was uneasy and he would kick her a little bit to move her away.

But Ruby was persistent. And pretty soon, Phoenix gave in and started to play with Ruby, as if to decide what this little kitten is going to do next.

And then, lo and behold, Phoenix started to bathe Ruby.

Now, there are three common reasons cats lick other cats. One, their mother licks their babies to keep them away from predators and to make them smell like her. This will make it easy for her to find them.

And three, they do it because they want to bond.

Well, it looks like Phoenix’s reason is the third one. Because since then, they’ve established a special connection.

They saw a side of Phoenix they’d never seen before. Now, he’s playing with Ruby and following her around. It even got to the point where Phoenix would play on his own, too.

Ruby unleashed the spirited side of him.

“Ruby helped him get to the point where he was happy. Once their connection formed, we knew that Phoenix needed her,” Jaina said. “We’re so glad they found each other.”

Watch the video below to see how Phoenix and Ruby’s relationship grew into an inseparable one.