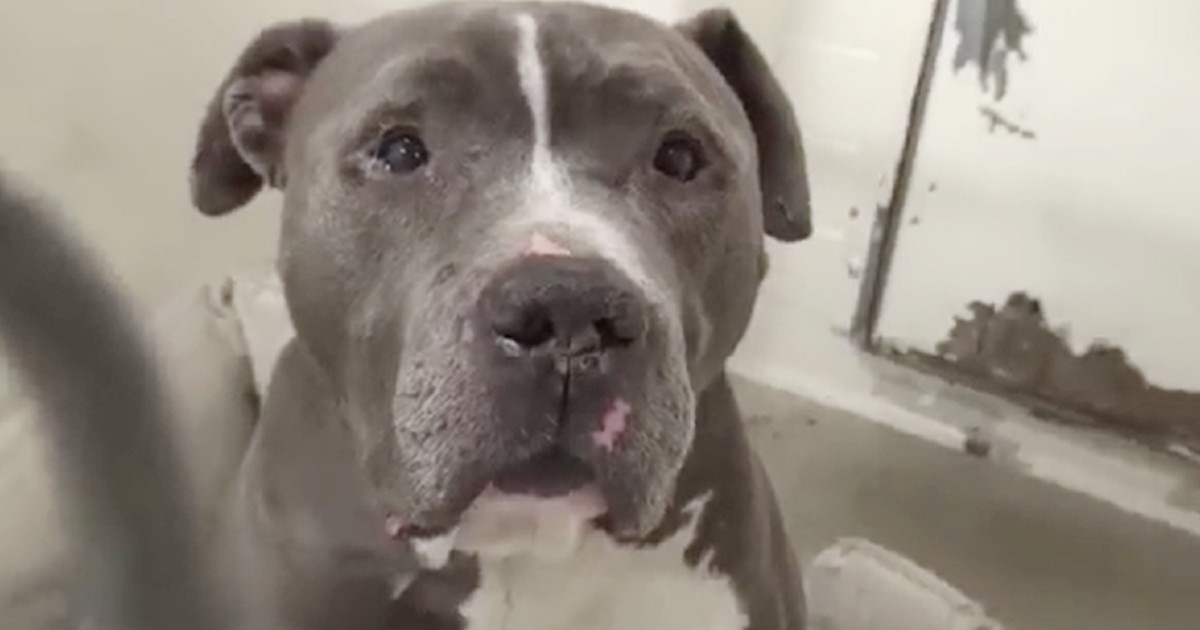 Imagine suddenly losing everything you know. Your house, your family — all gone in an instant. And you don’t have any idea why.

Sadly, many dogs who are surrendered to shelters experience this. They’re left in a loud, unfamiliar place with no understanding of how they got there.

This is just what happened to a pit bull named Blue King who lived in California.

Blue had been with his family for about a year, living happily. But one day, his owners decided to move.

Instead of taking Blue with them, they decided to leave him behind at a local shelter.

He was moved to Carlson Shelter, a facility that unfortunately must euthanize a large amount of the animals it receives due to a lack of space and funds it has to keep every animal alive.

The workers at the shelter were heartbroken when they saw Blue’s response to being left behind: tears.

Although some said the tears could have been caused by an allergic reaction, the dog’s obvious depression led the workers to one conclusion – that he was heartbroken and confused that his family had abandoned him.

Volunteers at the shelter did everything they could to cheer him up.

They spent time with him, tried to bring him treats, and encouraged him that everything would be OK. But instead of perking up and enjoying the company of the strangers, he continued to act depressed and despondent, tears still streaming down his face.

When it became clear how heartbroken this dog was, the volunteers at the shelter agreed that they had to do whatever they could to get this pup adopted.

Oftentimes, there are a lot of pit bulls that get taken to shelters, and because of people’s negative perceptions of the breed, they are often left unadopted. However, the volunteers there wanted people to see how sweet and loving Blue could be and how sad he was at being left behind.

So, they decided to take to social media. They shared a video of the dog crying in his kennel while they tried to coax him out of his bad mood.

They hoped that the video would inspire somebody to come to the shelter and adopt Blue.

After all, he was a young dog, and they were sure that he would make a great pet for somebody. These people truly set their hearts on getting this sweet dog a new home.

The video gained popularity on social media, and soon, a woman named Jennifer McKay came to visit Blue to see what kind of dog he was.

After coming back to the shelter three separate times to bond with and get to know Blue, both McKay and Blue knew that they were meant to be together. On the third visit, McKay adopted Blue and took him to his forever home.

Ever since Blue went to his new home, he has been acting like a completely different pup.

He’s now the happiest boy around, and he loves taking walks and curling up on the couch with this mom. This sweet boy finally has the home he deserves.

Check out Blue’s freedom video below!