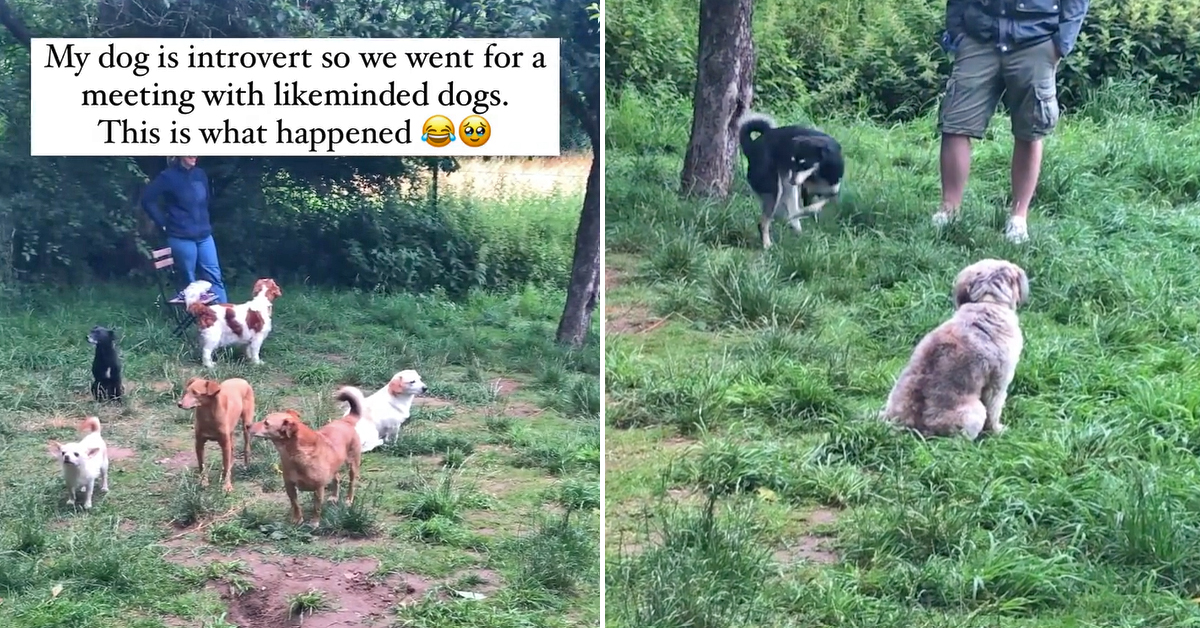 Dogs are in many ways, just like us humans. Dog owners and lovers will attest to that fact. This viral TikTok also proves how true that statement is.

There are introverts and extroverts, then those in between. Not everyone is in to social gatherings, and even these introverted dogs would agree with us when we say they can be exhausting.

So when a group of Swedish dog owners got together and took their pets to a park, the shy canines just had no idea how to behave. And they were super cute.

It’s a good thing then that the adorable moment was captured on video for all to see.

Sofia Rosten is one of the owners present and she shared the hilarious clip on her dog’s TikTok account.

A dog psychologist organized the event with the intentions of helping the owners’ timid dogs socialize with others just like them. Sounded like a good idea to be fair.

Rosten narrated that the meet up lasted for about an hour, with the dogs having a pretty good time at first. But since these four legged furrballs are like us humans, their social batteries did run out eventually.

The poor dogs began to feel a little too overwhelmed by the gathering, and that’s when the situation began to get awkward for all.

The dogs just stopped what they were doing, keeping to themselves and trying their best to avoid eye contact. It’s almost like they were waiting for their owners to take them home.

Rosten immediately took out her phone and recorded the scene before posting it on Qila’s TikTok and Instagram accounts. It was a moment too good to pass up.

“This was almost at the end of the meeting and we all thought it looked so funny so I recorded it,” she wrote.

“It’s like a pasture of cows,” Rosten continued to say in the overlaying text of the video.

The viral clip now has 4.4 million likes on TikTok at the time of writing. Just look at how those dogs stand around as if saying, “Are we done yet?”

And fellow introverts will definitely understand this feeling. Not that they want to be party poopers but sometimes, it can be too much to handle having to deal with so many others.

Qila, according to her owner, may be uneasy around other dogs, but she does like hanging around her humans.

There is another video on the pup’s TikTok account, with her owner describing it as a “professional attention seeker.”

But at least those dogs tried!

They did get out of their comfort zone, which deserves a lot of credit. And belly rubs, treats, and lots of kisses!

Watch the hilarious meet up in the video below!