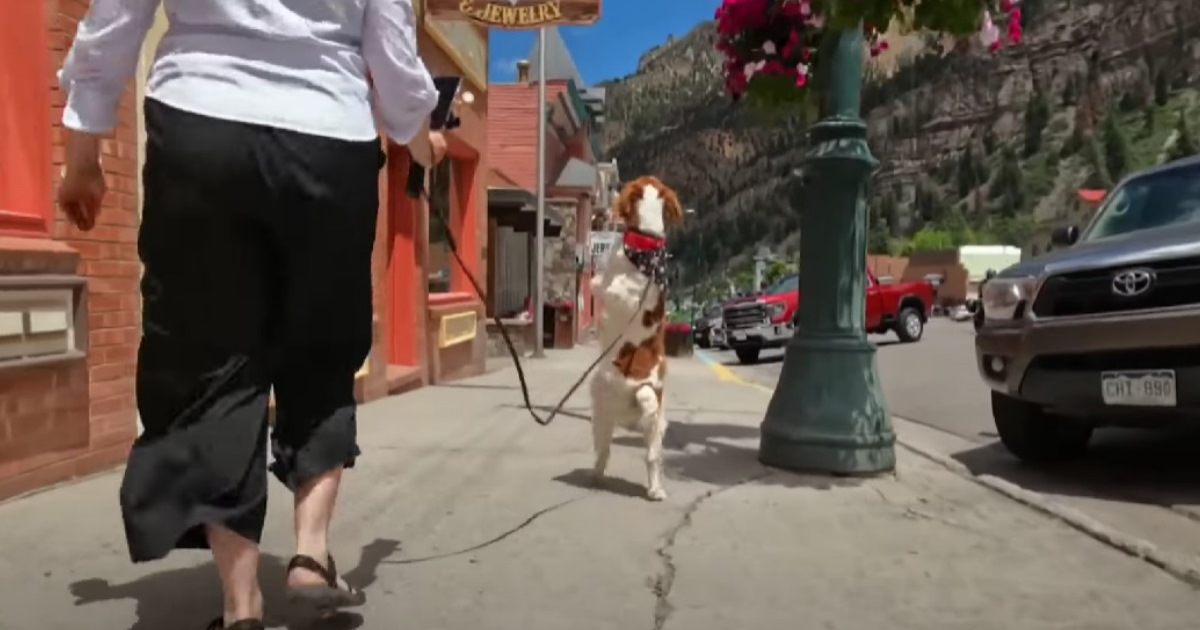 For those who live in Ouray, Colorado, watching Dexter the dog walk around town upright like a human is not an uncommon sight.

Dexter is actually a celebrity and he also has an official Instagram account, which has 150k followers. In fact, many people travel to Ouray, hoping to get a glimpse of the amazingly intelligent canine that has an inspiring story.

You see, Dexter didn’t learn to walk upright as part of his training or to look fancy or become famous. The dog had to teach himself to walk like that when he found himself unable to walk on four legs.

When Dexter was still a puppy, he escaped his yard, ran in the nearby streets and was eventually hit by a car.

The crush was so bad that he was severely injured. His owner knew that he would never be the same again. You see, he lost one of his front legs, and the other one was left badly damaged.

The only thing they could do for him was to provide a wheelchair for dogs so he could move around.

The wheelchair thing worked for a little while, but then at some point, Dexter’s owner realized that her dog had found an alternative to it.

Pasek was sitting on the porch while the dog was at the foot of her porch without his wheelchair. She went inside for a moment and, when she came back, she found Dexter at the top of the stairs. She was perplexed.

Curious to know how her dog had managed to get up there, she grabbed her phone, then put the pooch at the bottom of the stairs again. What she recorded was unbelievable.

Dexter stood up like a human and walked upstairs as if it was the most normal thing in the world.

Pasek was shocked, but she was happy that her dog had found a way to walk all by himself without needing any support.

Six years later, Dexter is the most popular celebrity in Ouray, while he is often featured in local parades.

Pasek is really proud of her doggie and she is really happy that Dexter’s story inspires people around the world.

“I am recovering from intensive radiation treatments for breast cancer and you certainly bring joy to my day,” reads one of the cards that Dexter receives in the mail on a monthly basis.

Pasek hopes that Dexter will inspire people out there fighting their own battles to never give up and follow their dreams.

Head over to the video below to see more of this adorable pooch!