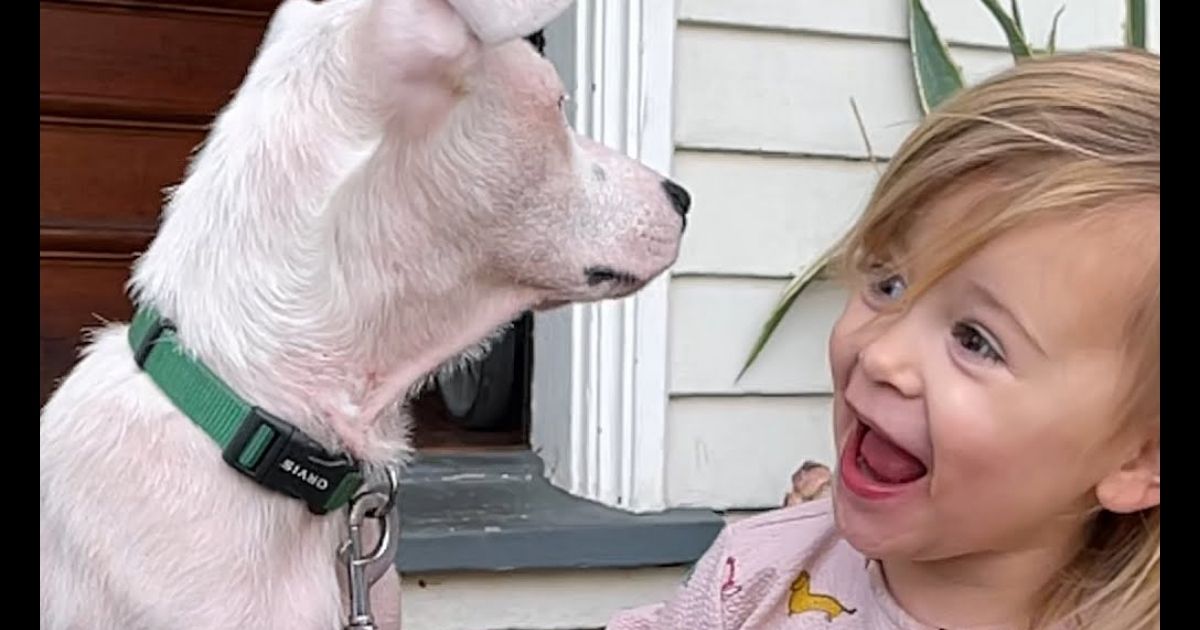 “He was this scrawny, hairless, weird-looking stray. And he was deaf.”

Moz the dog arrived at Thom Hawk’s home and just immediately crashed. The poor pup was just exhausted, sleeping for a day and a half. Thom knew it would take some time.

When Moz got up, Thom could smell the poor dog so he knew this fostered pup needed a good shower.

As soon as Moz got in the bath, he just relaxed and became content with Thom washing and rinsing him all over. Almost like his old life was being washed away from him.

“I think he trusted me.” Thom says of the bath situation.

Would you look at that face!

It wasn’t long after when Thom’s three other foster dogs began looking after Moz.

Moz would join the other dogs for walks around the neighborhood, slowly coming out of his shell and showing his personality. He loved going outside, sometimes even riding in Thom’s backpack.

Thom and his dogs walk around so much that people in the neighborhood are used to seeing them. Some would even make the effort of coming out just to say hi!

And who wouldn’t with such adorable dogs?

Thom was out one day when he passed by the home of Lauren and her 2-year-old daughter Lillian. Little Lillian laid eyes on Moz from her window and knew she just had to say “hello” to the cute pup.

Lillian met Moz and she was instantly smitten. It wasn’t long after that she was taking the fostered pup on walks and hanging out with him.

They were both small so it was a perfect match. Such a cute duo!

Thom let Lillian watch Moz for a day as he went out for errands. When he came back, he found the two just sitting there with Lillian drawing on the ground with chalk.

Moz was just there next to the little girl.

“It was really sweet to kinda watch this friendship blossom.” Thom shared.

Lillian and her family also looked after Moz for a few weeks when Thom went to new Mexico for work. Lillian was more than excited to help out and spend more time with the pup.

She really thought Moz was her baby. And the pup would always follow her around.

Thom was out for two weeks but Lillian’s mom would send him videos of her daughter and Moz and he knew the two were falling in love with each other.

When he came back home for Moz, he knew it was a done deal.

Thom and Lillian’s mom discussed the situation, agreeing that Moz could be a part of her family. As soon as the dog completed his second vaccination, that was it.

He walked Moz over to his new forever home where Lillian and her family were waiting with open arms. Thom says, “Moz hit the jackpot with these guys”.

It’s the start of a lifelong friendship alright!